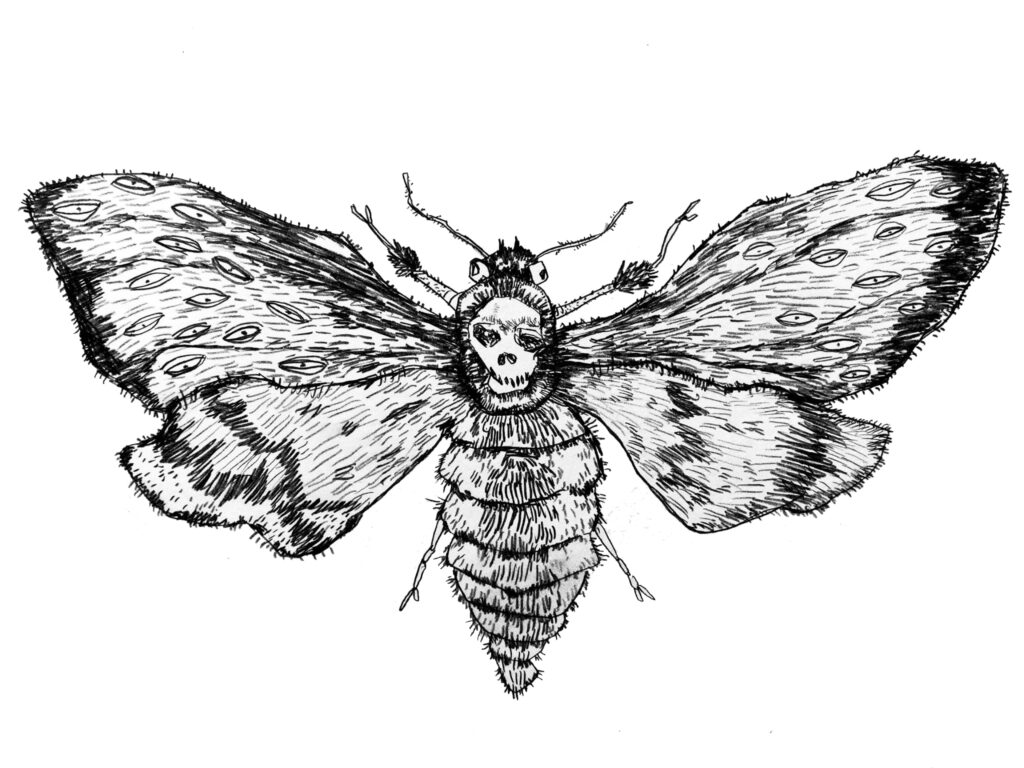 Acherontia atropos, the hawkmoth, also known as the death’s-head, lives among nightshades.
On its back it carries a skull.
It was baptized in the river of pain.
It thrives among carcasses and where epidemics rage.
On a leaf of nightshade, an egg hatches.

The sacred is nothing but an egg that hatches.

A glowing yellow body born, like a star in the night sky, like a flash of light that briefly displaces the shadow.
Life seeks nourishment and fills its fat deposits. Sun converted to tissue, blood and fat.

Exchanged into capital, infrastructure and highways.
A luminous globe seen from space.
A dull starless sky seen from the city’s illuminated night.

In the process, it digs its own grave. Rich with accumulated sunlight, it seeks an underground chamber where it can pupate.
In its self-chosen grave, its dark exile, it undergoes histolysis, i.e. that the dissolution of its tissue. Also called phylogenetic necrobiosis.
“The larva undergoes the same process of death in the pupa as the body in the grave that turns it into ammonia fat.”

The sacred undergoes the same process when it enters matter,
which first flourishes, in order to slowly dissolve.
The sacred is nothing but this descent and dissolution.

Nature draws its veil over its offspring.
The mirage of the sun in the sky.
And everything is fire.
The sacred is nothing but this fire

“The larva is dead in the cocoon
it has lost all form
consists only of masses of fat!
But how can he live?
How?
He’s dead, but he’s alive!
Maybe there is no death? ”

“Why should the luminous dots on the firmament be less accessible to us than the black dots on the map of France? As we take the train to get to Tarascon or Rouen, so we travel with death to a star. It had been thought that the earth was flat, but that does not prevent science from proving that it is round, which no one today would doubt. But still it is believed today that life is flat and extends from birth to death. But probably life too is round and stretches out with a scope much larger and richer than the half measure we know today. ”

What process does it undergo in the cocoon? The breaking down of tissues! The larva is completely dead. But a new life is nourished by this death. The death of the larva is a new beginning, a new conception.

Virus attacks the lung tissue.
Respiratory impairment.
The world is put on a ventilator.
The memory slips.
The air gasps for world.
Have we finally entered the our pupal stage?
A new geological grave?
Antroposema

Maybe that’s why the winged moth rises from its underground tomb marked by death.

What life is there when we have dissolved the tissues of this world?
Who weaves the silky wings of the decomposed masses of fat?

Naturally, the winged life is an extension of the dead larva, but they must be understood as two different individuals, as no individual can reasonably be said to preserve itself during the transformation.

Born by its own death.

How do we break down the tissues of capitalism?
The oil industry’s burning of accumulated summers?
The artificial ventilation of the economy?
Hyperventilation!
Hyperventilation!
Whitewash
The cell wall is so hard and keeps its sacred judgments hidden.

Histolysis, phylogenetic necrobiosis.
Break down the tissue. Dissolve, make new patterns.
Make constellations across the dark.
Give birth to new zodiac signs
With no meaning other than the one they reveal:
Celestial bodies in a celestial dance.
Connected and reborn in the swarm.

We weave ourselves into each other’s arms, out into umbilical cords.

Into my arms, my love

In tears
In dance
In laughter
In love

”Through loss we can regain the free movement of the universe, we can dance and swirl in the full rapture of those great swarms of stars. But we must, in the violent expenditure of self, perceive that we breathe in the power of death.”

On our backs we carry the mark of death.

How much does death weigh?
And who measures?

We must weave death into our motif.
Only life gives it gravity
And life must be born.

But what does the winged one know about our mythologizations?
Necrobiosis: That something must die in order to live.
That something is living death.

The sacred is nothing but that, that life is death and death is birth. 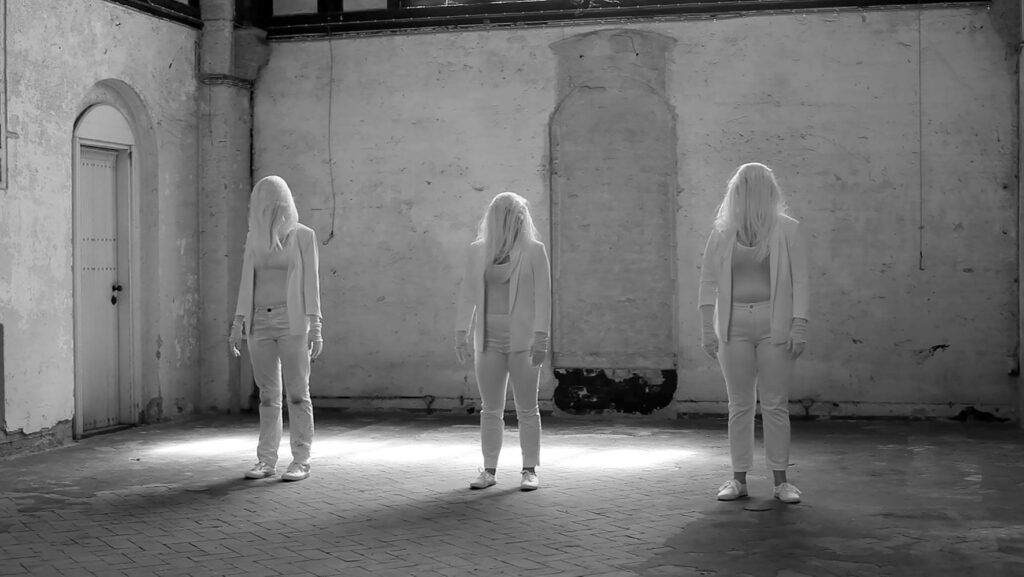 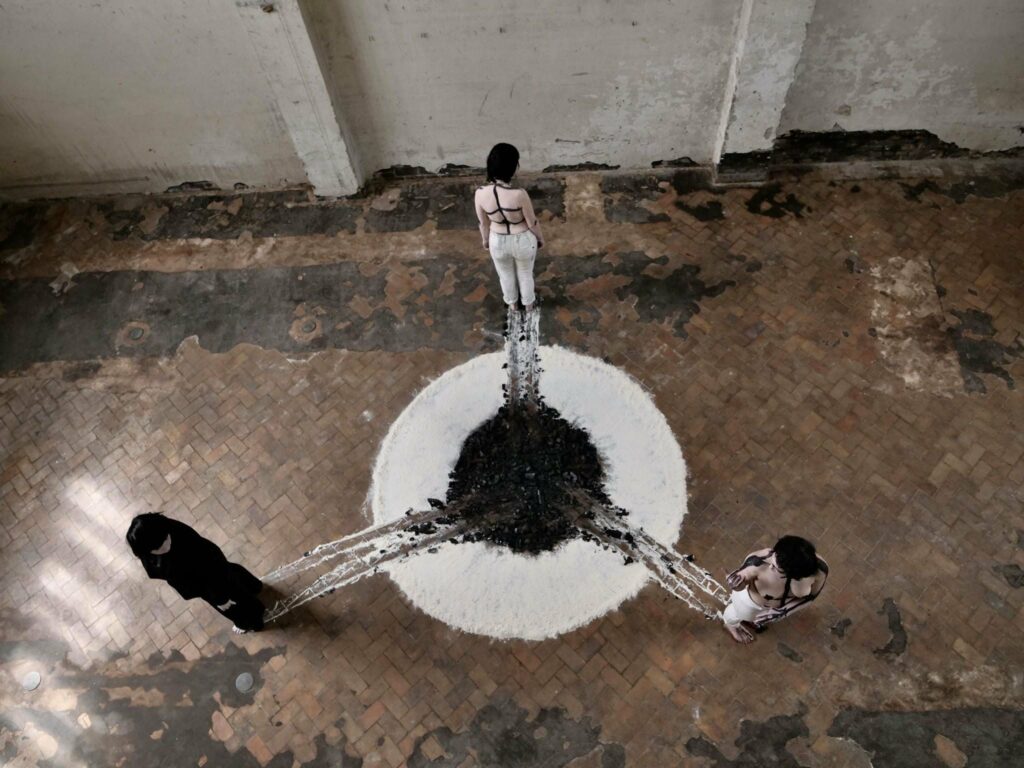 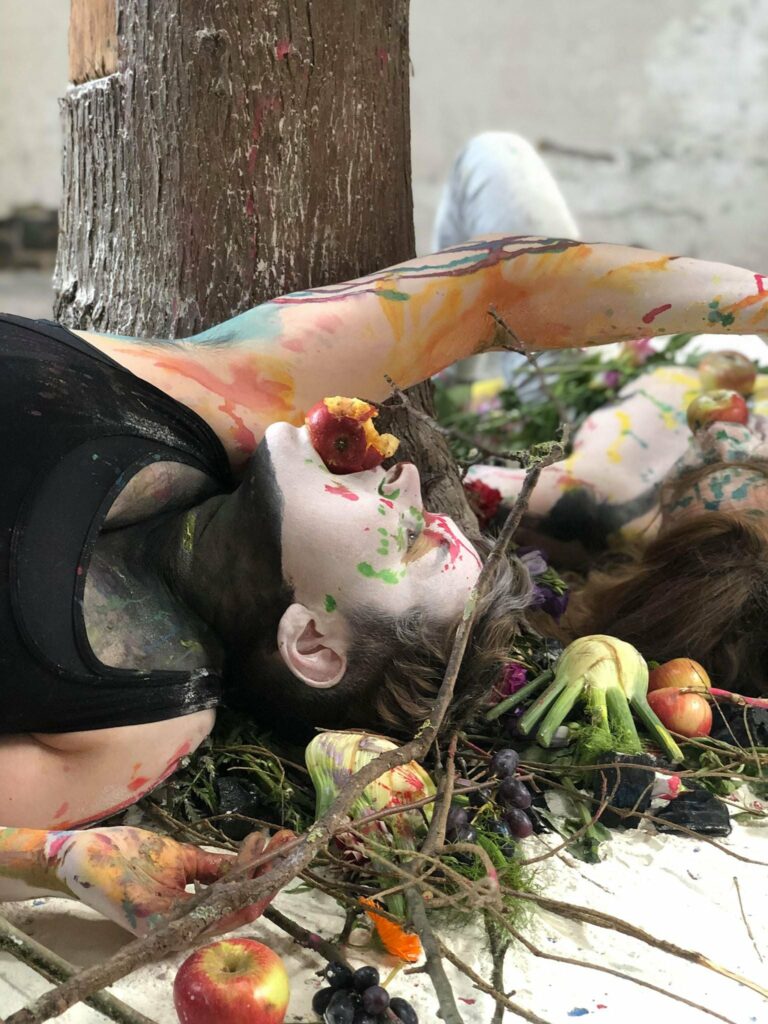 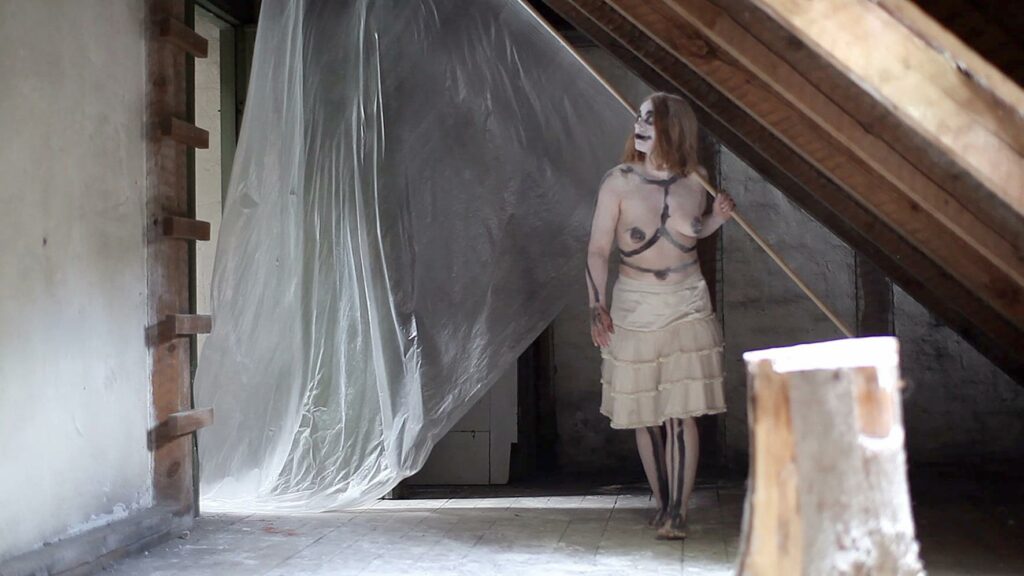 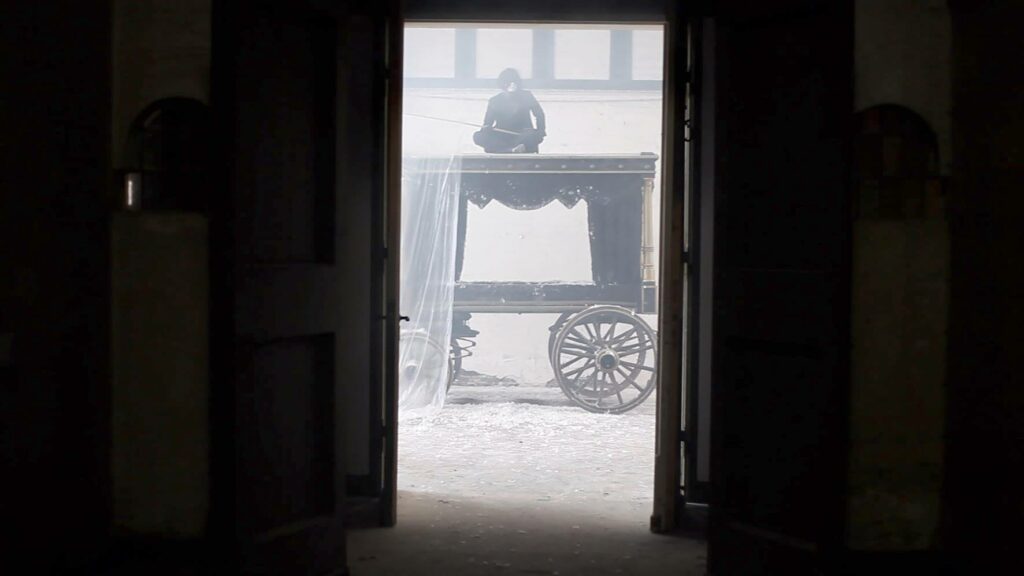 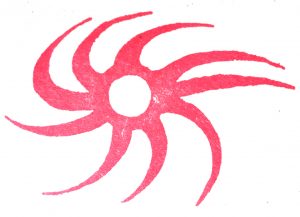